Adria Arjona is an American actress and model. She is best known for her portrayal of Emily on HBO’s True Detective, and for her role as Anathema Device in the Amazon Prime mini-series Good Omens. She starred as Dorothy Gale in the NBC television series Emerald City and voiced the character of Ramirez in the popular game Fortnite. Arjona also appeared in two episodes of the CBS television series Person of Interest. Her well-known films credits include The Belko Experiment, Pacific Rim: Uprising, and 6 Underground. Born Adria Arjona Torres on April 25, 1992 in San Juan, Puerto Rico, to parents Leslie Torres and Ricardo Arjona, she was raised in Mexico City. Arjona is of Guatemalan descent on her father’s side, and of Puerto Rican descent on her mother’s side. She has been married to Edgardo Canales since August 31, 2019. 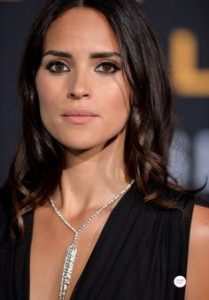 Adria Arjona Facts:
*She was born on April 25, 1992 in San Juan, Puerto Rico, to a Puerto Rican mother and a Guatemalan father.
*At 18, she moved to New York City.
*She used to work as a hostess and waitress at several New York restaurants in order to pay her bills and sustain her life.
*Follow her on Twitter, Facebook and Instagram.