Selena Gomez is an American singer, songwriter, and actress who rose to prominence by portraying the role of Alex Russo in the Disney Channel television series Wizards of Waverly Place. In 2008, Gomez formed her band Selena Gomez & the Scene after signing a recording contract with Hollywood Records. The band released the studio albums Kiss & Tell, A Year Without Rain, and When the Sun Goes Down, and was known for the singles “Naturally”, “Who Says”, “Round & Round”, and “Love You like a Love Song”. Gomez released her solo debut album, Stars Dance, in July 2013, followed by her second solo album, Revival in 2015; both albums hit #1 on the U.S. Billboard chart. Gomez has also appeared in the films Princess Protection Program, Ramona and Beezus, Monte Carlo, Hotel Transylvania, The Big Short, The Revised Fundamentals of Caregiving, Getaway, The Fundamentals of Caring, Neighbors 2, In Dubious Battle, The Dead Don’t Die, and The Voyage of Doctor Dolittle. She has also done voice work in the Hotel Transylvania film franchise, and serves as an executive producer of the Netflix television series 13 Reasons Why and Living Undocumented. Gomez is the recipient of various accolades including; an ALMA Award, an American Music Award, two Billboard Women in Music Awards, an iHeartRadio Music Award, an MTV Video Music Award, and sixteen Teen Choice Awards, as well as seven Guinness World Records. She has received seven Billboard Music Awards nominations. Born Selena Marie Gomez on July 22, 1992 in Grand Prairie, Texas, to parents Mandy Teefey and Ricardo Gomez, she is of Mexican descent on her father’s side, and of Italian descent on her mother’s side. Her parents divorced when she was age five, and she stayed with her mother. Gomez became famous in 2007 after being cast in the Disney Channel television series Wizards of Waverly Place. In 2008, Gomez dated Nick Jonas and was in an on-and-off relationship with Canadian pop star Justin Bieber from 2011 until 2014. In 2017, she dated Canadian singer-songwriter The Weeknd. 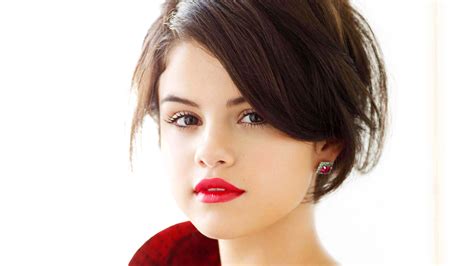 Selena Gomez Facts:
*She was born on July 22, 1992 in Grand Prairie, Texas, USA.
*She is the daughter of Mandy Teefey and Ricardo Gomez.
*She was named after Tejano singer Selena, who died in 1995.
*Growing up, she appeared in various pageants.
*In 2008, Gomez formed the band Selena Gomez & the Scene.
*In April 2012, she was named an ambassador to the Ryan Seacrest Foundation.
*She launched her own line of perfume called ‘Selena Gomez’ in July 2012.
*She released her solo debut album, ‘Stars Dance’ on July 19, 2013 via Hollywood Records.
*She released her second solo album Revival in 2015.
*She has a celebrity crush on Logan Lerman.
*She is a huge fan of Britney Spears, Johnny Depp and Lady Sovereign.
*Gomez’s close friend, actress Francia Raisa, donated her own kidney to Gomez in 2017.
*She wears a size 7 shoe and her zodiac sign is Cancer.
*Visit her official website: www.selenagomez.com
*Follow her on Twitter, YouTube, Facebook and Instagram.