PewDiePie is a Swedish YouTuber, comedian and video game player-commentator. He is best known for his videos on his YouTube channel ‘PewDiePie’, where he has more than 84 million subscribers and growing. He has been posting Let’s Play commentaries, vlogs, and comedic formatted shows. He released a parody self-help book called This Book Loves You in 2015. Born Felix Arvid Ulf Kjellberg on October 24, 1989 in Gothenburg, Sweden, to parents Lotta Kristine Johanna and Ulf Christian Kjellberg, he has a sister named sister Fanny. He attended and graduated from Göteborgs Högre Samskola and then went to pursue a degree in Industrial Economics and Technology Management at Chalmers University of Technology in Sweden but dropped out to pursue a career as an internet personality. In 2011, he began a relationship with Marzia Bisogin. They became engaged on April 27, 2018 and married in August 2019. 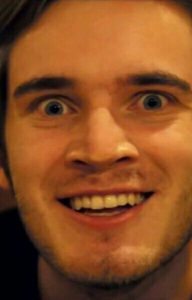 PewDiePie Facts:
*He was born on October 24, 1989 in Gothenburg, Sweden.
*His real name is Felix Arvid Ulf Kjellberg.
*He often collaborates with fellow gaming vloggers Markiplier, Cryaotic, and CinnamonToastKen.
*He was named Most Popular Gaming Web Star at the 2014 Teen Choice Awards.
*He was named on Time Magazine’s list of The World’s 100 Most Influential People in 2016.
*Forbes named him as the highest-earning YouTuber with his annual income reaching $15 million in December 2016.
*He enjoys playing tennis, golf and going sailing.
*He can play the guitar.
*He is an avid fan of Radiohead.
*He resides in the UK with his girlfriend Marzia Bisognin.
*Visit his official website: www.shoppewdiepie.com
*Follow him on Twitter, YouTube, Facebook and Instagram.