Amy Lee is an American singer and songwriter best known as the lead vocalist and founder of the rock band, Evanescence, whose song ‘Bring Me To Life’ went Platinum. The other members of the band are rhythm guitarist Troy McLawhorn, drummer Will Hunt, lead guitarist Terry Balsamo and bassist Tim McCord. Born in Riverside, California, on December 13, 1981, to Sara Cargill and John Lee, Amy Lynn Lee grew up in West Palm Beach, Florida and began writing music at age 11. She has been married to Josh Hartzler since May 2007. They have a son together. 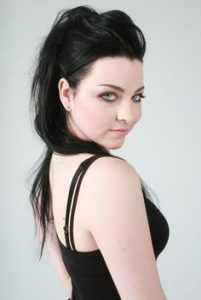 Amy Lee Facts:
*She is the lead singer of the American rock band Evanescence.
*She is a classically trained pianist.
*Her first name ‘Amy’ is inspired by the 70s song ‘Amie.’
*Her hobbies include collecting Care Bears, Rainbow Brite dolls, and videos from her childhood.
*She has a kitten called Zero.
*She is allergic to lobsters but still loves them.
*Follow her on Twitter, YouTube, Facebook and Instagram.