Turkish actress, Asli Enver is most famous for her portrayal of Mine in youth TV series Kavak Yelleri, and as Ahu Kumral in the Show TV crime drama Suskunlar. She is also known for her subsequent roles in Kayıp, Kardeşim Benim, Bana Artık Hicran De, and Tamam mıyız?. She was born Ayten Aslı Enver on May 10, 1984 in London, England and lived there until the age of twelve. She has two siblings, brother Akin, and sister, Anil. She attended Pera Fine Arts High School. She later graduated from Haliç University with a degree in theater. She was married to Birkan Sokullu from 2012 until 2015. In 2016, she began dating popular Turkish singer Murat Boz. 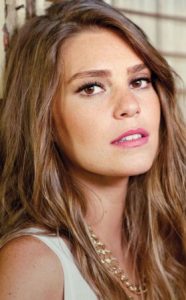 Asli Enver Facts:
*Born in London, UK, and lived there until she was twelve years old.
*She holds a British passport.
*She is fluent in English and Turkish.
*Follow her on Twitter, Facebook and Instagram.