Brad Pitt is an American actor and film producer. He is best known for his roles in films Fight Club, Legends of the Fall, Interview with the Vampire, The Curious Case of Benjamin Button, Moneyball, Inglourious Basterds, Troy, 12 Years a Slave, and World War Z. His other notable film appearances include 12 Monkeys, Babel, The Big Short, and Snatch. In 1995, Pitt won two MTV Movie Awards for his role as Louis de Pointe du Lac in the film Interview with the Vampire. Pitt has appeared as a guest-star in several television series such as Dallas, 21 Jump Street, Head of the Class, and Another World. Born William Bradley Pitt on December 18, 1963 in Shawnee, Oklahoma, to Jane Etta, a school counsellor, and William Alvin Pitt, who ran a trucking company, Pitt was raised in Springfield, Missouri. He studied at Kickapoo High School in Springfield, Missouri, where he was a member of the golf, tennis, wrestling, swimming and debate teams. He began his acting career in 1987 with roles in the hit Fox television series 21 Jumpstreet, and made his big-screen debut in the 1989 horror film Cutting Class. Pitt was married to Jennifer Aniston from 2000 to 2005. Pitt then began dating Angelina Jolie. Pitt and Jolie married in France on August 28, 2014. Together, they have six children: Maddox, Shiloh, Pax, Zahara and twins Knox and Vivienne. In September 2016, they separated and Jolie filed for divorce. 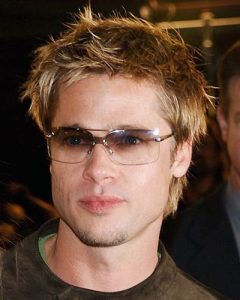 Brad Pitt Facts:
*He was born on December 18, 1963 in Shawnee, Oklahoma, USA.
*He is the eldest of three children and was raised as Southern Baptist.
*He made his television debut in May 1987 with a two-episode role on the NBC soap opera Another World.
*He won two MTV Movie Awards for his role in Interview with the Vampire in 1995.
*He donated $100,000 to the Discovery Center, a children’s learning museum. (June 1996)
*He has been named in the list of sexiest people, or the beautiful people in the world multiple times.
*For his role in the 2004 movie Troy, he gained 20 pounds.
*He has his teeth capped.
*He has a home at Lake Mohawk in Sparta, New Jersey.
*His favorite movies are Planet of the Apes, the Bosnian war film Remake and Saturday Night Fever.
*His favorite actress is Dianne Wiest.
*His favorite football team is the New Orleans Saints.
*He owns and plays Taylor Guitars.
*He has Single Engine Land pilot license.
*Forbes magazine estimated his earnings for the year to be $35 million in 2007.
*He lives in Los Angeles, Malibu, Goleta, California, Benerville, France and New Orleans, Louisiana.
*He is friends with George Clooney, Matt Damon, Julia Roberts, Cate Blanchett and Edward Norton.
*He is fluent in French.