Brooke Mueller is a media personality, actress and real estate investor. She is the ex-wife of actor Charlie Sheen. Mueller was born Brooke Jaye Mueller on August 19, 1977 in upstate New York, the daughter of Moira Fiore and Allen Mueller. She has a brother named Scott Allen Mueller, and a half-sister named Sydney Wolofsky. She had twin sons named Bob Sheen and Max Sheen, with actor Charlie Sheen before they divorced in 2011. 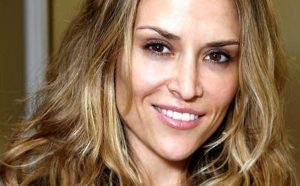 Relationships / Affairs / Boyfriend:
She was previously in a relationship with Dave Navarro.

Brooke Mueller Education:
*She attended the Benjamin School for highschool.

Brooke Mueller Facts:
*She lost her father when she was twelve.
*Her father was Lutheran while her mother was Jewish.
*She is the former wife of actor Charlie Sheen.
*She had her first small acting role on the series USA High in 1998.
*Follow Mueller on Twitter.