Caitlin Stasey is an Australian actress. She is best known for roles such as Rachel Kinski in Neighbours (2005–2009), Francesca Thomas in The Sleepover Club (2003–2006), and Ellie Linton in the 2010 film Tomorrow, When the War Began. She played the role of Lady Kenna in the American series Reign from 2013 to 2015 and had a recurring role in the ABC2 series Please Like Me from 2013 to 2016. As a singer, she has sang a duet with another singer Dean Geyer on May 19, 2008, which they performed at Erinsborough High School Formal. Born Caitlin Jean Stasey on May 1, 1990 in Melbourne, Victoria, Australia, to Sally and David Stasey, she has a younger sister named Victoria. She moved to Los Angeles in 2010. She had her television debut at age 13 in the children’s TV series The Sleepover Club as Francesca ‘Frankie’ Thomas. 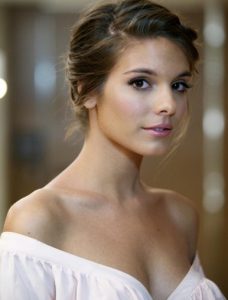 Caitlin Stasey Facts:
*Her parents are from Norwich, England.
*Her father was atheist, and her mom was agnostic.
*She began taking an interest in acting when she was six years old.
*She was chosen to travel the world to film the Qantas TV commercial ‘I still call Australia home’ in the choir in 2000, at the age of 10.
*She was ranked #15 on Girlfriend Magazines ’20 Hottest Under 20′.
*Follow her on Twitter, Facebook and Instagram.