Chris Pratt is an American actor of film and television. He is best known for television roles such as Bright Abbott in Everwood, Ché in The O.C., and Andy Dwyer in Parks and Recreation, as well as film roles such as Owen in the Jurassic Park movie series and Star-Lord in the Guardians of the Galaxy films. His other notable film appearances include: Moneyball, Passengers, The Five-Year Engagement, Zero Dark Thirty, Delivery Man, and Her. He also was the voice of Emmet Brickowski in the 2014 animated film The Lego Movie and The Lego Movie 2: The Second Part. 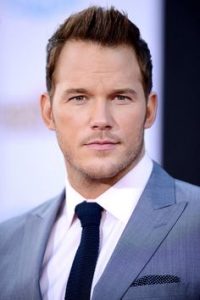 Chris Pratt Facts:
*Born Christopher Michael Pratt on June 21, 1979 in Virginia, Minnesota, he is the youngest child of Kathleen Louise and Daniel Clifton Pratt.
*He was raised in Lake Stevens, Washington, and has two older siblings named Cully and Angie.
*He was discovered by actress/director Rae Dawn Chong.
*Time named Pratt one of the 100 most influential people in the world on the annual Time 100 list in 2015.
*His hobbies include fishing, hunting and working on cars.
*He is friends with Aubrey Plaza.
*He has two children: son, Jack Pratt with ex-wife, Anna Faris and daughter, Lyla Maria Schwarzenegger Pratt with wife, Katherine Schwarzenegger.
*Follow him on Twitter, Facebook and Instagram.