Dave Rubin is an American stand-up comedian, talk show host, and television personality. He is best known for hosting The Rubin Report, a political talk show and podcast currently airing on YouTube. He was a part of The Young Turks Network and Ora TV. He previously hosted The Ben and Dave Show and The Six Pack, a podcast and radio talk show on SiriusXM satellite radio. Born David Joshua Rubin on June 26, 1976 in Brooklyn, New York, New York, he is the oldest of three children, and was raised in a “fairly secular Jewish household on Long Island”. He belongs to Jewish descent. After graduating from Syosset High School in 1994, he attended and graduated from Binghamton University in 1998 with a bachelor’s degree in political science. He started his career as a stand-up comedian, and interned at The Daily Show with Jon Stewart in 1999. He’s gay and has been married to producer David Janet since August 2015. 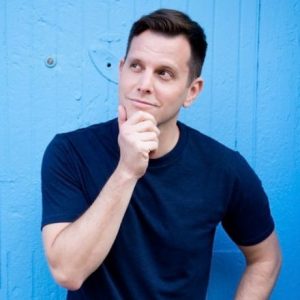 Dave Rubin Facts:
*He was born in Brooklyn, New York, New York on June 26, 1976.
*He lived for 13 years on the Upper West Side in Manhattan, New York City.
*He began his career as a stand-up comedian.
*He came out as gay in 2006.
*Visit his official website: www.daverubin.tv
*Follow him on Twitter, YouTube and Facebook.