English singer Elton John Biography, Family, Career, Height, Weight, Age, Measurements will be discussed here. Get the latest info of Elton John including his personal details, body statistics, family details and facts. He was the biggest music star in the 1970s, and has recorded hundreds of songs during his long career.

Elton John is an English singer, songwriter, pianist and composer who rose to prominence in the early 1970s when he and lyricist Bernie Taupin wrote several songs which he performed and recorded. He has sold more than 300 million records worldwide, making him one of the best-selling music artists of all time. His biggest selling studio album is his 1973 hit album Goodbye Yellow Brick Road, which sold more than 30 million copies worldwide. John’s notable hit songs include “Rocket Man,” “Tiny Dancer,” “Bennie and the Jets” and “Candle in the Wind.” His accolades include five Grammy Awards, five Brit Awards; including for Outstanding Contribution to Music; two Academy Awards, two Golden Globes, a Tony Award, a Disney Legends Award, and the Kennedy Center Honor.

Born Reginald Kenneth Dwight on March 25, 1947 in Pinner, Middlesex, England, to parents Sheila Eileen and Stanley Dwight, John started playing the piano at age four and won a junior scholarship to the Royal Academy of Music. He started his music career immediately after leaving school. 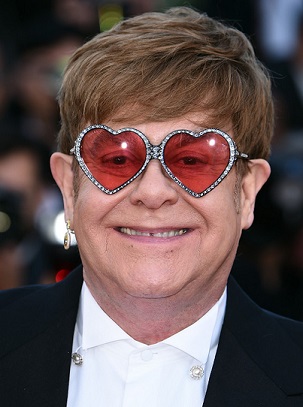 He has been married to David Furnish since December 21, 2005. They have two sons named Zachary and Elijah. He was previously married to Renate Blauel.

Elton John Facts:
*Born on March 25, 1947 in Pinner, UK, he was raised in a council house in Pinner by his maternal grandparents.
*He started playing the piano he was four years old.
*He attended Pinner Wood Junior School, Reddiford School and Pinner County Grammar School, until he was 17, when he left just prior to his A-Level examinations to pursue a career in music.
*He was the first Western rock star to perform in Israel and the USSR in 1979.
*He was voted the 49th Greatest Rock ‘n’ Roll Artist of all time by Rolling Stone magazine.
*He performed at Princess Diana’s funeral at Westminster Abbey in 1997 and he was knighted by Queen Elizabeth II in 1998.
*He was a close friend of the late rock singer Freddie Mercury.
*His song “Philadelphia Freedom” was a tribute to tennis star Billie Jean King.
*He is close friends with Billy Joel, Billy Connolly and David Beckham.
*He is a reformed drug addict, bulimic and alcoholic. He also has epilepsy.
*He has raised millions of pounds for people living with HIV and AIDS through the Elton John AIDS Foundation.
*Visit his official website: www.eltonjohn.com