Emilio Estévez is an American actor, director, producer and screenwriter. He is best known as a member of the Brat Pack, with roles in 1980s films such as The Breakfast Club, St. Elmo’s Fire, and The Outsiders. His other notable roles include Repo Man, The Mighty Ducks, and its sequels, Stakeout, Another Stakeout, Maximum Overdrive, and Bobby. He has written and directed films like The Public, The Way, Bobby, Men at Work, and Wisdom. He is the son of actor Martin Sheen and older brother of actor Charlie Sheen. 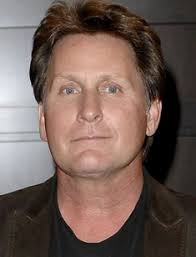 Emilio Estevez Facts:
*He was born on May 12, 1962 in New York City, New York, USA.
*His father is actor Martin Sheen, and his brother is actor Charlie Sheen.
*One of the original members of the acting Brat Pack of the 1980s, along with Judd Nelson, Sean Penn, Anthony Michael Hall, Demi Moore, Rob Lowe, Molly Ringwald, Ally Sheedy and Andrew McCarthy.
*He is an avid supporter Millwall F.C., a South-East London Football Club.
*He was once engaged to Demi Moore.