Gulnara Karimova is an Uzbek social activist, businesswoman, singer, fashion designer and diplomat. She is the eldest daughter of the late authoritarian president of Uzbekistan, Islom Karimov. She is the founder of the Forum of Culture and Arts of Uzbekistan Foundations Board of Trustees. Gulnara Karimova was born on July 8, 1972 in Fergana, Uzbekistan as Gulnara Islomovna Karimova. She is the mother of two children, Iman and Islam. She was married to Afghan-American businessman Mansur Maqsudi from 1991 ro 2003. 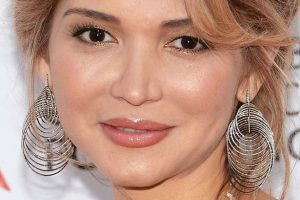 Gulnara Karimova Education:
Attended Tashkent University of Information Technologies from 1989 to 1994.
Graduated from the Youth Mathematic Academy in Tashkent in 1988.

Gulnara Karimova Facts:
*Her father, Islam Karimov, was elected as the first President of Uzbekistan in 1991.
*She is known both for her pop star image as well as her political ambitions.
*She has released music under the name Googoosha, debuting in 2006 with the song “Unutma Meni.”
*Follow her on Twitter.