Hyeon Chung is a South Korean professional tennis player who achieved his career’s best ranking on 5 February 2018, which was #29. Turning professional in 2014 at age 18, he reached the quarterfinal of the 2018 Australian Open upsetting Novak Djokovic in the fourth round. Born in Suwon, South Korea, on May 19, 1996, to Kim Young-mi and Chung Suk-jin, Chung took up tennis as a way to try to help maintain his eyesight after requiring glasses at a young age. He won the Eddie Herr International and Junior Orange Bowl Boys under-12s titles in December 2008, and was subsequently signed, along with his brother Chung Hong, to the Nick Bollettieri Tennis Academy at IMG in Florida. He began competing on the ITF junior tour in 2012, and was runner-up in the 2013 Wimbledon Boys’ Singles, a month after winning his first Futures title. 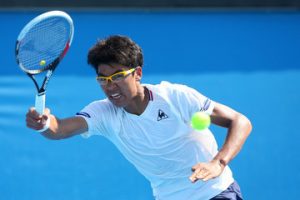 Hyeon Chung Facts:
*He started to wear glasses at a very young age.
*His father is a tennis coach.
*He is currently the South Korean #1.
*The first Korean player to reach a Grand Slam semifinal. (2018 Australian Open)
*Became famous for upsetting Novak Djokovic on his way to the quarterfinal at the 2018 Australian Open.
*Follow him on Facebook and Instagram.