Ivan Rakitić is a Croatian professional football player who plays for La Liga club Sevilla as a central or attacking midfielder. Rakitic previously played for FC Basel, Schalke 04, Sevilla and Barcelona before joining Sevilla in 2020. Rakitić played for Switzerland at youth level, but decided to represent Croatia at senior level. He made his debut for Croatia in 2007 and represented the country at the UEFA Euro 2008, 2012 and 2016, and the 2014 and 2018 FIFA World Cup, reaching the final of the latter. He retired from international football in September 2020. 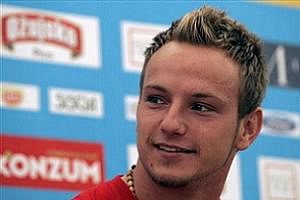 Ivan Rakitic Facts:
*He was born on March 10, 1988 in Rheinfelden, Switzerland, to Croat parents.
*He spent his childhood and early career in Switzerland and played for Switzerland at youth level.
*He made his professional debut with FC Basel in 2005.
*He became a member of the Croatian national team in 2007.
*He served as captain of Seville FC from 2013 to 2014.
*He has a tattoo on his right arm supporting his brother Dejan with the word “Dejan.”
*He is married to Raquel Mauri with whom he has two daughters.
*Follow him on Twitter, Facebook and Instagram.