Jennie Kim is a South-Korean singer. She is best known as a member of YG Entertainment’s girl group ‘Black Pink’, along with Jisoo, Jennie, Rosé, and Lisa. She is known as ‘the YG princess’ in the group. In August 2016, Black Pink released their debut EP, Square One, which yielded the singles “Boombayah,” “Whistle,” “Playing With Fire,” and “As If It’s Your Last.” “Whistle” became the number one hit on the ‘Goan Digital Chart’. Born on January 16, 1996 in Anyang, South Korea, her father owns a hospital and her mother is associated with the media company CJ E&M. Kim studied in New Zealand at ACG Parnell College, and speaks Japanese, Spanish, English, and Korean fluently. Before debuting with Black Pink, she first appeared in the G-Dragon’s music video “That XX” and was also featured on his single “Black.” 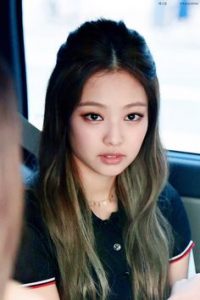 Jennie Kim Facts:
*Born in Anyang, South Korea, she lived in Auckland, New Zealand for 5 years.
*She’s an only child.
*Her Chinese zodiac sign is Pig.
*She can play the piano and the flute.
*She joined YG Entertainment in August 2010.
*She has two puppies named Kai and Kuma.
*She is friends with Nayeon of TWICE, Jang Hanna, Jinny Park and Cho Miyeon.
*She has a tattoo on her right wrist and one behind her left shoulder.
*Follow her on Twitter, Facebook and Instagram.