Jerry Hall is an American model and actress born in Gonzales, Texas. She is best known for her former high-profile relationship with The Rolling Stones lead singer Mick Jagger. She was born Jerry Faye Hall on July 2, 1956 in Gonzales, Texas, to Marjorie and John P. Hall. She belongs to English, Irish, and Dutch descent. She grew up in the Dallas suburb of Mesquite, Texas, where she attended and graduated from North Mesquite High School. She has a twin sister, Terry, and three older sisters, including actress Cyndy Hall. She was married to Mick Jagger from 1990 to 1999. They had four children, Georgia, Gabriel, Elizabeth and James. She married the media magnate Rupert Murdoch in 2016. 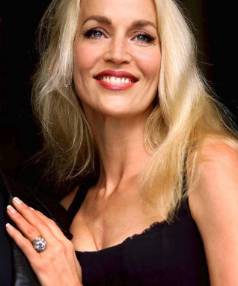 Jerry Hall Facts:
*At age 21, she left home to become a model.
*She was discovered sunbathing at a hostel in the French Riviera by modeling agent Claude Haddad.
*She was named #11 in Channel 5’s “World’s greatest supermodel”.
*Her two model daughters, Elizabeth Jagger and Georgia Jagger, also appeared on the cover of Vogue magazine.
*Follow her on Twitter.