Joanna Moro is a Lithuanian-born Polish actress, singer and TV presenter. She portrayed the role of singer Anna German in the series Anna German. She is also known for the television work on series such as Talyanka, Ojciec Mateusz, Blondynka, and Na dobre i na złe. Joanna was nominated on the award of Telekamery 2014 in the category “The Best Actress” in November 2013. In 2014, she joined the first emitted by Polsat edition of Dancing with the Stars, where she placed 2nd. Joanna was born on December 13, 1984 in Vilnius, Lithuania into a Polish family. While growing up, she was into music, dancing and theater, played at the school’s drama club. She graduated from Adam Mickiewicz Monument in Vilnius. She attended and graduated from the Theatre Academy of Alexander Zelwerowicz’s in Warsaw in 2007. She has been married to Miroslaw Szpilewski. Together they have two sons, Mikolaj and Jeremi. 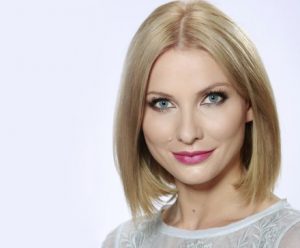 Joanna Moro Facts:
*Born in Vilnius, Lithuania, her parents are Polish.
*She speaks Polish, English, Italian, Lithuanian and Russian fluently.
*In 2003, she left Lithuania to study in Poland and live there permanently in Warsaw.
*Follow her on Facebook and Instagram.