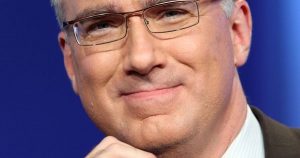 Relationships / Affairs / Girlfriend:
He was in a relationship with TV reporter Katy Tur for three years.

Keith Olbermann Facts:
*He has Celiac disease and must eat a gluten-free diet
*He has never been married and has no children
*His ancestry includes German, Polish, Ukrainian, German, Dutch, Belgian, English, Irish, and French.
*His first book, “The Major League Coaches”, was published when he was 14.
*Follow him on Twitter and Facebook.