Kristen Schaal is an American actress, comedian, and writer. She is best known by the public for her roles as Mel on the HBO series Flight of the Conchords, Mabel Pines on Gravity Falls, and Louise Belcher on FOX animated comedy Bob’s Burgers. She can also be recognized her appearances as a commentator on The Daily Show, Amanda Simmons on The Hotwives of Orlando, Victoria Best on WordGirl, and Hazel Wassername on 30 Rock. She began her career as a stand up comedian and first appeared on the Comedy Central show Live at Gotham in 2006. For her performance in adult animated comedy-series BoJack Horseman, she received a Primetime Emmy Award nomination. She was born Kristen Joy Schaal on January 24, 1978 in Longmont, Colorado, USA into a Lutheran family. She belongs to German, English, and Dutch descent. Since 2012, she has been married to Daily Show staff writer Rich Blomquist, with whom she wrote a humor book, The Sexy Book Of Sexy Sex in 2010. 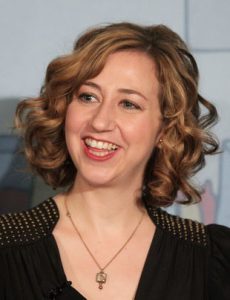 Kristen Schaal Facts:
*She is a graduate of Northwestern University.
*She provides the voice of Louise in the animated series Bob’s Burgers.
*She won the Andy Kaufman Award in 2005.
*Follow her on Twitter, Myspace and Instagram.