Kurt Cobain was an American musician who was best known as the lead singer, guitarist, and primary songwriter of the grunge band Nirvana. His hit single, “Smells Like Teen Spirit”, was voted by Rolling Stone Magazine and MTV as the 3rd best pop song out of 100 of all time. Cobain was born Kurt Donald Cobain on February 20, 1967 in Aberdeen, Washington, to Wendy Elizabeth, a waitress and Donald Leland Cobain, an automotive mechanic. He was raised with sister, Kim. He was of Irish, English, German, and French descent. He married Courtney Love in 1992 and the couple had a daughter named Frances Bean Cobain. After struggling with drugs and depression during the height of Nirvana’s popularity, he committed suicide at his Seattle home at the age of 27. 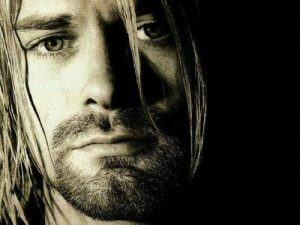 Kurt Cobain Facts:
*He was of Irish, English, German, and French descent.
*His mom was 19 and his dad was 21 when he was born.
*His parents divorced when he was seven.
*He was a left-handed guitarist and a right-handed drummer.
*His death marked the end of the Grunge era.
*He was ranked as the 12th greatest guitarist of all time by David Fricke of Rolling Stone in 2003.