Kylie Jenner is an American reality television personality and model. She achieved recognition appearing on the E! reality television series Keeping Up with the Kardashians. She is also famous for creating her own cosmetics line called Kylie Cosmetics. She starred on her own reality television seriess, Life of Kylie, which premiered on E! on August 6, 2017. Born Kylie Kristen Jenner on August 10, 1997 in Los Angeles, California, she is a daughter of Caitlyn Jenner and Kris Jenner. She has one sister, Kendall Jenner, and eight half-siblings: Kourtney, Kim, Khloé, and Rob Kardashian, along with Brody, Brandon, Casey, and Burt Jenner. She went to Sierra Canyon School (SCS) in Chatsworth, California, and finished her high school diploma from Laurel Springs School in July 2015. She began her modeling career with Sears line “Crush Your Style”. In April 2017, she began dating Travis Scott, with whom she has one daughter, Stormi. She was previously in a relationship with Tyga from 2015 to 2016. 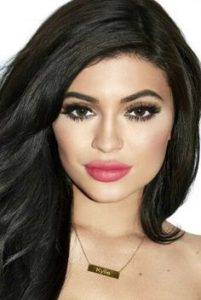 Kylie Jenner Facts:
*She was born on August 10, 1997, in Los Angeles, California.
*She was a cheerleader while in Sierra Canyon School.
*She worked as a runway model for Forever 21’s Hello Kitty line.
*She has done photo shoots with Teen Vogue and OK! magazine.
*She launched her own cosmetics line called “Kylie Cosmetics” in 2015.
*She was named one of Time magazine’s Most Influential Teens in 2015.
*She is a fan of Kaiya Eve Couture.
*She is close friends with Sofia Richie.
*She is good friends with Bella Hadid.
*She is a car collector. Owns a Ferrari Spider, several Mercedes G Wagons, Rolls Royce Autograph, Rolls Royce Ghost, Land Rover, Mercedes Maybach, and Lamborghini Aventador.
*Visit her official website: www.thekyliejenner.com
*Follow her on Twitter, YouTube, Facebook and Instagram.