Melanie Sykes is a British television and radio presenter, and model who co-hosted Today with Des and Mel with Des O’Connor and Let’s Do Lunch with Gino D’Acampo. In 2014, she competed in the fourteenth series of I’m a Celebrity…Get Me Out of Here!, and hosted Eastenders Revealed. Born Melanie Ann Sykes on August 7, 1970 in Ashton-under-Lyne, England, UK, to parents Wendy and Robert Sykes, she is of Anglo-Burmese descent on her father’s side, and of Anglo-Indian descent on her mother’s side. She has two sisters, one younger (Stacy) and one older (Samantha). Sykes attended Mossley Hollins High School in Mossley, Tameside, Greater Manchester and went to Ashton Sixth Form College to study A-level Religious Studies. She first achieved fame appearing in Boddingtons beer ads in the mid-1990s and modeled for Berlei lingerie. She was married to Daniel Caltagirone from 2001 to 2009 and Jack Cockings from 2013 to 2016. She has two children: Valentino Luca and Roman Caltagirone. 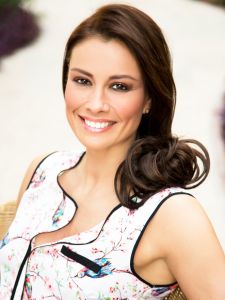 Books: Blooming Beautiful: My Plan for Looking Great, Being Healthy and Surviving Hormonal Havoc, Throughout Pregnancy and As a New Mum

Melanie Sykes Facts:
*She was born on August 7, 1970 in Ashton-under-Lyne, England, UK.
*She was born to an English father and a Catholic Anglo-Indian mother.
*She studied A-level Religious Studies at Ashton Sixth Form College.
*She is afraid of heights.
*She was a member of the Ashtonian Brass Band along with her parents and two sisters.
*Before marriage, she was romantically involved with singer/songwriter Matt Goss for five years.
*Visit her official website: www.melaniesykes.com
*Follow her on Twitter and Instagram.