Yeoh Chu-Kheng, born August 6, 1962, is a Chinese Malaysian actress. Her parents are Janet Yeoh and Yeoh Kian Teik, a lawyer and politician. She is of Han Chinese (Hokkien) descent and has two brothers, Robert and Lam Hoe. Michelle is well known for performing her own stunts in the Hong Kong action films that brought her to fame in the early 1990s. She also became recognized in the Western world for her roles in the 1997 James Bond film Tomorrow Never Dies, playing Wai Lin, and the Chinese-language martial arts film Crouching Tiger, Hidden Dragon. She was married to Dickson Poon from 1988 to 1992. 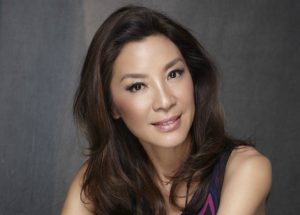 Michelle Yeoh Facts:
*She is of Han Chinese (Hokkien) descent.
*One of the highest paid Chinese-language actresses in the world.
*She is one of the only female stars whom Jackie Chan lets do her own stunts.
*She won the Miss Malaysia beauty pageant in 1983.
*She speaks 3 languages, English, Malay and Cantonese.
*Connect with Michelle on Facebook and Instagram.