NF is an American rapper, singer and songwriter, best known for his hit singles “Therapy Session”, “How Could You Leave Us”, “Grindin”, and “I’ll Keep On”. His 2014’s self-titled EP NF was ranked #12 on the Christian Albums chart, #4 on the Top Gospel Albums chart, and #15 on the Top Rap Albums chart. Born Nathan John Feuerstein on March 30, 1991 in Gladwin, Michigan, USA, to parents Jennifer M. Warner and Timothy J. Feuerstein, he has two sisters. His parents divorced, and he was raised primarily by his mother. NF graduated from Gladwin High School in 2009. In September 2018, he married social media star and fitness guru Bridgette Doremus. 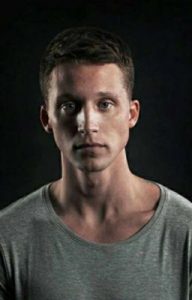 NF Facts:
*He was born on March 30, 1991 in Gladwin, Michigan, USA.
*His birth name is Nathan John Feuerstein.
*His ancestry includes German, English, Scottish, Scots-Irish, Northern Irish, French-Canadian, and Cornish.
*He played basketball at Gladwin High School.
*His mother passed away from a drug overdose in 2009.
*In 2012, NF signed with Xist Music.
*He released his official, self-titled debut in 2014.
*His 2017’s album “Perception” debuted at #1 on the Billboard 200.
*In 2014, NF signed to Capitol Christian Music Group.
*His song “Intro” was featured in the video game Madden NFL 16.
*Visit his official website: www.nfrealmusic.com
*Follow him on Twitter, SoundCloud, YouTube, Facebook and Instagram.