Terri Seymour is a British television personality and actress, best known for hosting the British version of Wheel of Fortune. In 2004, Seymour joined the American entertainment news show Extra as a correspondent. She is also notable for working as a reporter on ITV2’s The Xtra Factor and This Morning. Born Theresa Helene Seymour on November 28, 1974 in Little Chalfont, Buckinghamshire, United Kingdom, she was born to an English mother but she never knew her father. Seymour started modeling at the age of 12. She has been in a relationship with Clark Mallon. Together they have one daughter, Coco Seymour-Mallon. She was previously in a relationship with television personality Simon Cowell from 2002 to 2008. 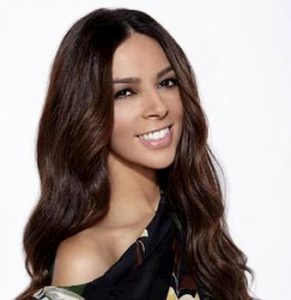 Terri Seymour Facts:
*She was born on November 28, 1974 in Little Chalfont, Buckinghamshire, United Kingdom.
*Her mother, Margaret, was a single mother.
*She began modelling at age 12.
*She was seen in Marillion’s “No One Can” music video early in her career.
*She joined the American entertainment news program Extra in 2004.
*She suffers from an autoimmune disorder known as systemic lupus erythematosus.
*Follow her on Twitter, Facebook and Instagram.