Tia Carrere is an American actress, model, voice artist, and singer, born January 2, 1967, in Honolulu, Hawaii, to Audrey Duhinio Janairo, a computer supervisor, and Alexander Janairo, a banker. Her ancestry includes Chinese, Spanish, Filipino and Hawaiian. She is best known for her starring role as Cassandra Wong in the 1992 film “Wayne’s World.” Her other credits include 1993’s Wayne’s World 2, 1993’s Rising Sun, and 1994’s True Lies. Tia began her acting career with a minor role on the daytime soap opera General Hospital in 1985. For two years, she played Jade, a nursing student. She was married to Simon Wakelin from 2002 to 2010. They had a daughter named Bianca Wakelin in 2005. She was previously married to Elie Samaha from 1992 to 2000. 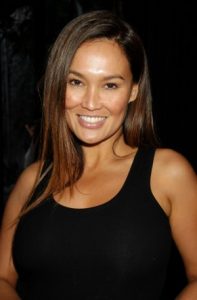 Tia Carrere Facts:
*She belongs to Chinese, Spanish, Filipino and Hawaiian descent.
*The name “Carrere” came as a tribute to former James Bond Girl Barbara Carrera.
*She speaks Hawaiian Pidgin fluently.
*People Magazine named her one of the top 50 Most Beautiful People in the World in 1992.
*She Ranked #69 in the 2001 FHM-USA list of 100 Sexiest Women in the World.
*Follow her on Twitter, Facebook and Instagram.