Tico Torres is an American musician, entrepreneur, and artist, best known as the drummer, percussionist, and a songwriter of the Grammy Award-winning rock band Bon Jovi. Torres also sang lead vocals on a song on the box set 100,000,000 Bon Jovi Fans Can’t Be Wrong, as well as backing vocals on a couple of the early Bon Jovi tracks, notably “Born to Be My Baby” and “Love for Sale”. He was the original drummer for the glam rock band T. Roth and Another Pretty Face and played on their 1980 album Face Facts. Born Hector Samuel Juan Torres on October 7, 1953 in New York City, New York, to parents Emma and Hector Torres, he grew up in the Colonia section of Woodbridge Township, New Jersey. He has a sister Opi and brother Andrew. Torres was educated at John F. Kennedy Memorial High School in Iselin. He has been married to Maria Alejandra Marquez since September 23, 2001. Together they have a son, Hector Alexander Torres. He was previously married to Eva Herzigová. 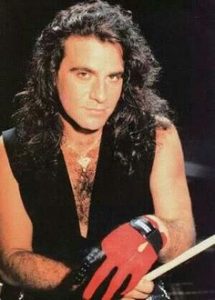 Tico Torres Facts:
*He was born on October 7, 1953 in New York City, New York, USA.
*He was a jazz fan as a youth and studied music with Joe Morello.
*He joined with Jon Bon Jovi in 1983
*He was inducted into the Rock and Roll Hall of Fame as a member of Bon Jovi in 2018.
*He has a pilot’s license.
*He enjoys golfing, horseback riding, painting, and sculpting.
*Follow him on Facebook.