Zayn Malik is a British singer and songwriter who was a member of English-Irish pop boy band One Direction. With One Direction, he released the albums Up All Night (2011), Take Me Home (2012), Midnight Memories (2013), and Four (2014), which topped charts in most major markets. Malik left the band in March 2015 and signed a solo recording contract with RCA Records. In 2016, he released his debut studio album Mind of Mine, featuring the single “Pillowtalk,” which debuted at number one in a number of international charts, including the UK Singles Chart and the US Billboard Hot 100. Born Zayn Jawaad Malik on January 12, 1993 in Bradford, England, to British-Pakistani father Yaser Malik and English mother Patricia, he was raised alongside his sisters, Waliyha, Safaa and Doniya. He began writing raps when he was at school, and sang on stage for the first time when singer Jay Sean visited his school. At the age of 17, he auditioned as a solo artist for the television competition The X Factor. He has been in a relationship with American model Gigi Hadid since late 2015. They welcomed their first child together, a daughter named Khai, in September 2020. 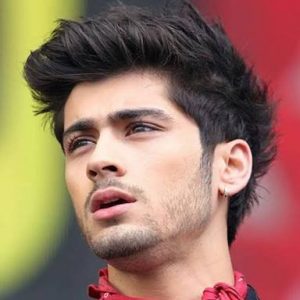 Zayn Malik Facts:
*Born and raised in Bradford, his family belongs to the Muslim faith.
*He did boxing for two years from the ages of 15 to 17.
*He was a member of boy band One Direction.
*His favorite band is *NSYNC.
*Bruno Mars is his dream collaborator.
*He is afraid of water and can’t swim.
*Visit his official website: www.inzayn.com
*Follow him on Twitter, YouTube VEVO, YouTube, Tumblr, Facebook and Instagram.