6ix9ine is an American rapper, singer, songwriter, and Internet personality. He is best known for the hits “Gummo,” “Exodia,” “Kooda,” “Gotti,” “Go Crazy,” “Oweee” and “Zeta Zero 0.5”. He released his debut mixtape, Day69, which debuted at #4 on the Billboard 200 album chart, and his debut studio album, Dummy Boy, debuted at #2 on the Billboard 200 chart. He collaborated with Nicki Minaj on the popular song “FEFE” in 2018. Outside music, he is known for his distinctive rainbow-themed look, tattoos, aggressive style of rapping, public feuds with fellow celebrities, legal issues, and controversial public persona. Born on May 8, 1996 in Bushwick, New York City, New York, his real name is Daniel Hernandez. He is of Puerto Rican descent on his father’s side, and of Mexican descent on his mother’s side. He started to make a name for himself via the music upload network SoundCloud. He has a daughter. 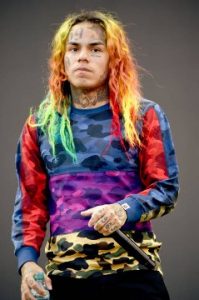 6ix9ine Education:
He left school in the 8th grade when he was expelled.

6ix9ine Facts:
*He was born on May 8, 1996 in Bushwick, New York City, New York, USA.
*His real name is Daniel Hernandez.
*He began his rap career in 2012.
*His debut single “Gummo”, was certified platinum by the RIAA.
*His debut mixtape, titled Day69, peaked at #4 on Billboard 200 charts and at #5 on Canadian Albums Chart.
*His his eighth single, “Fefe”, debuted at #4 on the Billboard Hot 100.
*Visit his official website: www.6ix9ineshop.com
*Follow him on Twitter, YouTube, Facebook and Instagram.