Khalid is an American singer and songwriter. He is best known for the hit singles “Location,” “Young Dumb & Broke,” “Better,” “Let’s Go,” and “Coaster.” His debut single, “Location”, peaked at #16 on the US Billboard Hot 100 chart and was certified quadruple platinum by RIAA. On March 3, 2017, Khalid released his debut studio album, American Teen. He also released an EP, Suncity, on October 19, 2018 through RCA Records, which debuted at #8 on the Billboard 200. Born on February 11, 1998 in Fort Stewart, Georgia, USA, his real name is Khalid Donnel Robinson. He spent much of his childhood in Fort Campbell in Kentucky, Fort Drum in Watertown, New York, and six years in Heidelberg, Germany due to his mother Linda Wolfe’s career in the military. He studied singing and musical theater in high school. 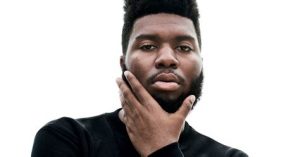 Khalid Facts:
*He was born on February 11, 1998 in Fort Stewart, Georgia, USA.
*His birth name is Khalid Donnel Robinson.
*He is signed to Right Hand Music Group and RCA Records.
*He was named at #2 spot on the Billboard Twitter Emerging Artists chart in July 2016.
*He cites his mother as his leading musical inspiration.
*He has also cited Kendrick Lamar, Frank Ocean, Grizzly Bear, Chance the Rapper, Lorde, A$AP Rocky, Father John Misty, India.Arie, and James Blake as other influences
*Visit his official website: www.khalidofficial.com.
*Follow him on Twitter, Youtube, SoundCloud, Facebook and Instagram.