Aaron Eckhart is an American actor best known for his roles as Harvey Dent, also known as Two Face, in The Dark Knight (2008), George in Erin Brockovich (2000), SSGT Michael Nantz in Battle Los Angeles (2011), and as Nick Naylor in the film, Thank You for Smoking (2005), for which he received a Golden Globe nomination. His other movie credits include The Core, The Missing, Paycheck, Rabbit Hole, Sully, and I, Frankenstein. Born as Aaron Edward Eckhart in Cupertino, California, Michelle moved to the United Kingdom when he was 13. He is the son of Mary Martha Eckhart, a children’s book author, and James Conrad Eckhart, a computer executive. He has two older brothers, James and Adam. He is of German descent on his father’s side, and of English, Scottish, German, and Northern Irish (Scots-Irish) descent on his mother’s side. He was engaged to actress Emily Cline, but separated from her in 1998. He was also in a relationship with musician Kristyn Osborn. 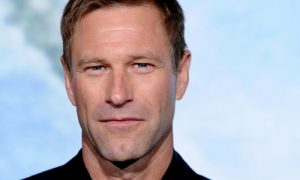 Aaron Eckhart Facts:
*He has German, English, Scottish and Northern Irish ancestry.
*He moved to the United Kingdom when he was 13.
*His father is a computer executive, and his mother is a children’s book author.
*He was engaged to actress Emily Cline, but separated from her in 1998.
*He was raised as a member of The Church of Jesus Christ of Latter-day Saints (LDS Church).
*Follow him on Twitter.