Holly Montag is an American television personality best known for her work on the reality series The Hills alongside her younger sister Heidi Montag. She placed sixth in the second season of the American version of I’m a Celebrity…Get Me Out of Here! Holly was born in Crested Butte, Colorado, USA on October 15, 1983. She is the daughter of Darlene and Bill Montag, and older sister of Heidi Montag. On September 13, 2014, Holly married her longtime boyfriend Richie Wilson following a year-long engagement. They have one child. 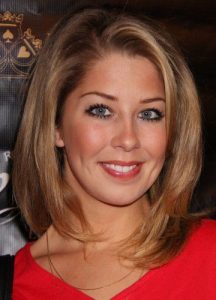 Holly Montag Education:
Attended the University of Colorado Boulder on an academic scholarship. (2002)

Holly Montag Facts:
*Older sister of Heidi Montag.
*She was born in Silver Spring, Maryland, and raised in Crested Butte, Colorado.
*She appeared alongside Lauren Conrad on MTV’s hit series The Hills.
*Follow her on Twitter and Instagram.