Abigail Ratchford is an American glamour model, aspiring actress and social media personality. She has appeared on several magazines including Esquire, Maxim, Sports Illustrated, People Magazine, ZOO, E! Network, The New York Post, The Daily Mail and The Wall Street Journal. She has been appeared in numerous billboard campaigns on Sunset Boulevard. She has also modeled for designers such as Michael Costello and appeared in Stello Spring Collection show during LA Fashion Week. The fifth of seven children, Abigail was born on February 12, 1992 in Scranton, Pennsylvania. She belongs to German, Irish and French descent. Her father is an attorney and her mother runs a local child care program. She was educated at Catholic grade school, Catholic high school and Jesuit University. She dated Jamie Iovine from 2014 to 2015. 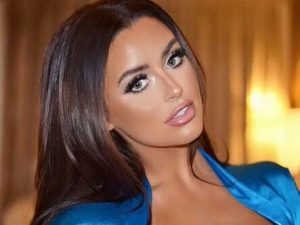 Abigail Ratchford Facts:
*She was born on February 12, 1992 in Scranton, Pennsylvania.
*She competed in Miss Pennsylvania pageant when she was 21 years old.
*She was nicknamed “The Sweetheart” by Celebrity gossip outlet TMZ, after she made appearances on TMZ on TV.
*She relocated to Los Angeles in 2014.
*Visit her official website: www.officialabigailratchford.com
*Follow her on Twitter, Facebook and Instagram.