Adrian Scarborough is a British actor. He is known for his roles in television, such as Cranford, Crashing, Upstairs Downstairs, The Paradise, A Very English Scandal, and Killing Eve, and in the films The Madness of King George, The History Boys, Gosford Park, Vera Drake, The Kings Speech, Les Misérables and 1917. Scarborough received a Laurence Olivier Award for Best Actor in a Supporting Role in a revival of the play After the Dance by Terence Rattigan in March 2011. Born Adrian Philip Scarborough on May 10, 1968 in Melton Mowbray, United Kingdom, Scarborough attended Brooksby Melton College and earned his acting degree from the famed Bristol Old Vic Theatre School in England. He made his film debut in The Madness of King George (1994). He is married to Rose Blackshaw with whom he has two children. 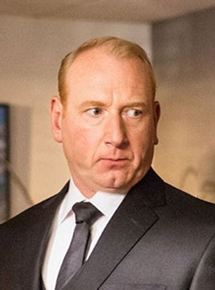 Adrian Scarborough Facts:
*He was born on May 10, 1968 in Melton Mowbray, United Kingdom.
*He was educated at Brooksby Melton College.
*He made his film debut in 1994 in The Madness of King George.
*He currently resides in Berkhamsted, Hertfordshire.