Adrienne Bailon is an American singer, actress and television personality, best known as a former member of girl groups such as 3LW and The Cheetah Girls. From 2007 to 2009, she appeared as Rob’s girlfriend in a total of eight episodes of the reality series Keeping Up with the Kardashians. In 2013, Bailon became a co-host of the daytime talk show The Real. Born Adrienne Eliza Bailon on October 24, 1983 in Lower East Side, New York, to an Ecuadorean father, Freddie Bailon and a Puerto Rican mother, Nilda Alicea, she has an older sister named Claudette. Her parents divorced when she was very small, and she was raised by her mother and stepfather, Joe Felix. She attended High School for Health Professions and Human Services in Manhattan, New York City. Bailon was discovered in October 1999 by Ricky Martin when she was singing in the church choir at Madison Square Garden. On November 11, 2016, Bailon married Israel Houghton. She was previously in a relationship with Rob Kardashian. 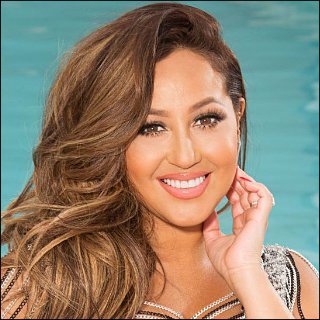 Adrienne Bailon Facts:
*She was born on October 24, 1983 in Lower East Side, New York, USA.
*She is of Puerto Rican/Ecuadorian descent.
*She has been singing since she was about 5 years old.
*In 2000, she debuted as one-third of the R&B/pop group 3LW.
*She has her own nail polish line called Fingertip Fetish.
*Her beauty icon is Nicaraguan Latina, Bianca Jagger.
*She is a huge fan of fellow NuyoRican Jennifer Lopez and Tejano singer Selena.
*She is fluent in Spanish.
*She was briefly engaged to Lenny Santiago from February to September 2015.
*Visit her official website: www.adriennebailon.com
*Follow her on Twitter, Facebook and Instagram.