Ahna Capri was an American film and television actress. She is best remembered by the public for her role as Tania (secretary of Han) in the 1973 martial-arts film Enter the Dragon. She had a recurring role as Mary Rose in the ABC/Warner Brothers sitcom, Room for One More, and was cast in the film Payday, with Rip Torn in the lead role as a country music singer in Alabama. Born Anna Marie Nanasi on July 6, 1944 in Budapest, Hungary, to Hungarian parents, Capri moved with her family to America as a refugee in 1950. She began her career at age 11, appearing on series like Father Knows Best, The Danny Thomas Show, and The Adventures of Rin Tin Tin. She made her film debut at age thirteen in the 1957 film Western Outlaw’s Son. Capri was involved in a fatal traffic accident in North Hollywood on August 9, 2010 when a five-ton truck collided with her car. After eleven days in a coma and on life support, she died on August 19, 2010 at the age of sixty-six. 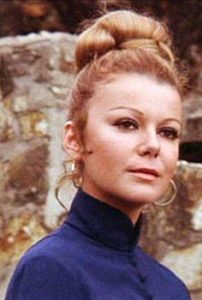 Ahna Capri Facts:
*She was born on July 6, 1944 in Budapest, Hungary.
*She arrived in the United States with her family as a refugee at age six.
*She started acting at the age of 11.
*She never married.