Aimee Carrero is an American actress born in Dominican Republic. She is famous for her portrayal of Angie on the Cartoon Network live-action television series Level Up. Her other television credits include Baby Daddy, The Mentalist, Elena of Avalor (voice role), and The Mentalist. She was born in the Dominican Republic and was raised in Miami, Florida. Her father is Rodney Carrero-Santana and her mother is Mary (Josefina) Carrero. She has a younger brother, Rodney Gabriel. She was educated at Archbishop Coleman F. Carroll High School and Florida International University. Since 2016, she has been married to actor Tim Rock. 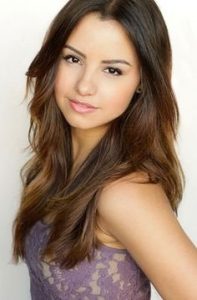 Aimee Carrero Facts:
*She was born in the Dominican Republic but raised in Florida, United States.
*She is the daughter of Mary and Rodney Carrero-Santana.
*She portrayed the role of Emily in the 2009 film Alvin and the Chipmunks: The Squeakquel.
*In 2012, she made her Off-Broadway debut in Atlantic Theater Company’s world premiere play, What Rhymes with America.
*Follow her on Twitter and Instagram.