Actress Sophia Bush is known for her roles in television, such as One Tree Hill, and Chicago P.D. and in the films John Tucker Must Die, The Hitcher and the 2008 The Narrows. She played Brooke Davis in the television drama series One Tree Hill for nine seasons (186 episodes). Born as Sophia Anna Bush in Pasadena, California, Sophia is the only child of Charles William Bush, a renowned advertising and celebrity photographer, and Maureen Bush, a photography studio manager. She was married to Chad Michael Murray from 2005 to 2006. 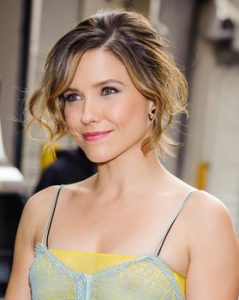 Sophia Bush Facts:
*She is the only child of her parents.
*She played volleyball while in high school.
*Her hobbies include horseback riding and photography.
*She was named no. 77 in 2010 and no. 53 in 2011 in Buddy TV’s 100 Sexiest Women list.
*She was placed #90 in FHM’s 100 Sexiest Women of 2007.
*Good friends with Bevin Prince, Hilarie Burton, Bethany Joy Lenz, Milo Ventimiglia, James Lafferty, Brittany Snow, and Danneel Ackles.
*Follow her on Twitter, Facebook and Instagram.