Alaska is a Spanish-Mexican singer, songwriter, DJ, and television personality who was one of the founding members of the La Movida Madrileña, the cultural and artistic movement that followed the end of Francoist Spain. She was also in the bands Kaka de Luxe, Alaska y Los Pegamoides, Alaska y Dinarama and Fangoria. Alaska has collaborated on the soundtracks of The Killer Tongue (La Lengua Asesina) with Robert Englund, The Bear Cub (Cachorro), Bandid Lover (Amante Bandido) in Miguel Bosé’s Papito, etc. Born Olvido Gara Jova on June 13, 1963 in Mexico, Distrito Federal, Mexico, to parents América Jova Godoy and Manuel Gara López, she has a sister Berta and brother Manuel. She has been married to Mario Vaquerizo since 1999. 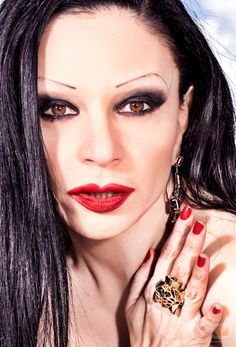 Alaska Facts:
*She was born on June 13, 1963 in Mexico, Distrito Federal, Mexico.
*Her father was a Spaniard exiled during the Spanish Civil War and her mother a Cuban exiled by Castro.
*One of the founding members of the La Movida Madrileña.
*Alaska and Nacho Canut formed a band, Fangoria in 1989.
*She was a big fan of artists such as Lou Reed or T-Rex, but David Bowie was her biggest influence.
*Follow her on Instagram.