Alicia Witt is an American film, stage, and television actress, as well as a singer-songwriter and pianist. She is best known for her roles in films Fun (1994), Mr. Holland’s Opus (1995), Vanilla Sky (2001), Two Weeks Notice (2002), Last Holiday (2006) and 88 Minutes (2007). She is also known for the television work on series such as House of Lies, The Walking Dead, Nashville, The Sopranos, Two and a Half Men, Law & Order: Criminal Intent, Cybill, Justified, Twin Peaks: The Return, Justified and Friday Night Lights. As a singer, she released her self-titled debut album in 2009. Born Alicia Roanne Witt on August 21, 1975 in Worcester, Massachusetts, USA, to Robert Witt, a science teacher and photographer, and Diane Pietro, a junior high school reading teacher. She has a brother, Ian, who appeared with her in the film Liebestraum (1991). Alicia received her high school diploma at the age of 14, and studied piano at Boston University. She made her film debut as Alia Atreides in David Lynch’s science fiction classic, Dune (1984). She also appeared in Lynch’s television series Twin Peaks (1990). She was married to Nathan Foulger from 2001 to 2006. She was in a relationship with musician Ben Folds from 2012 to 2014. 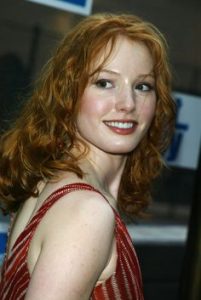 Alicia Witt Education:
She was home schooled and received her high school equivalency credential at age 14.
She studied piano at Boston University.

Alicia Witt Facts:
*She was born on August 21, 1975 in Worcester, Massachusetts, USA.
*Her mother was in the Guinness Book of World Records from 1988 to 1996 for having the world’s longest hair.
*She is a classically trained pianist.
*She made her film debut in Dune (1984).
*Visit her official website: www.aliciawittmusic.com
*Follow her on Twitter, YouTube, Facebook and Instagram.