Alize Cornet is a French professional tennis player who achieved her career’s best ranking on February 16, 2009, which was #11. She has won several titles in her professional career. Cornet was born on January 22, 1990 in Nice, Alpes-Maritimes, to Francis Cornet and Patricia Cornet. She has one brother, Sebastien. She turned professional in 2006. 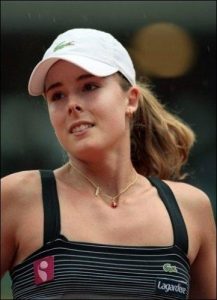 Alize Cornet Facts:
*She turned professional in 2006.
*She was only 4 when she started playing tennis.
*She made her Grand Slam debut at the French Open in 2005.
*She has won five singles and three doubles titles on the WTA tour.
*Favourite Surface: Clay
*Hobbies: Basketball, Playing the piano, Listening to music
*Catch Cornet on Twitter, Facebook and Instagram.