Amal Arafa is an actress, singer, and writer from Damascus, Syria. She began her acting career at a very young age. She is known for her roles in The Long Night, Eastern Bed: Takht Sharqi, Shay ma Yahtarek, Sood el-Matar, Al-Layl al-Taweel, Aylet 5 Nojoom, Dounia, Zekrayat al-Zaman al-Kadem, Spot Light, Ashtar, Quloob Saghira, and Al-Za3eem. Amal was born on March 18, 1970 in Damascus, Syria. She is the daughter of famous Syrian composer “Suheil Arafa”, with whom she learned how to sing. She married actor Abdel Moneim Amairi in 2001, and the couple had two daughters, Salma in 2005 and Mariam in 2008 before getting divorced in 2015. 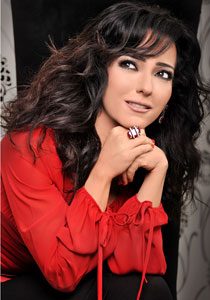