Actress, model and singer who is known for her roles in television, such as Party of Five, The Last Ship, The Practice, Strike Back, Boston Legal, and Nip/Tuck, and in the films Doomsday, Stuck on You, Get Carter, Underworld: Rise of the Lycans, The Life of David Gale, and the 2010 Reuniting the Rubins. For her performance in Boston Legal, she received a Screen Actors Guild Award nomination. As a singer, she has released two albums, Come Alive (1998) and Female Icon (1999). Rhona began her career as a model, and rose to prominence as the Lara Croft model from 1997 to 1998. Rhona was born Rhona Natasha Mitra on August 9, 1976 in Hampstead, London to Anthony Mitra, a cosmetic surgeon, and Nora Downey. She is of Bengali Indian and English descent on her father’s side, and of Irish descent on her mother’s side. She has an older and a younger brother. 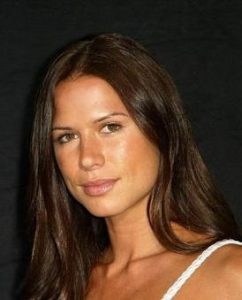 Rhona Mitra Facts:
*She is of Bengali Indian and Irish descent.
*In 2001, she was placed no. 46 on the Maxim Hot 100 Women.
*Her acting role model is actress Susan Sarandon.
*She has two butterfly tattoos on her abdomen.
*Follow her on Twitter, Facebook and Instagram.