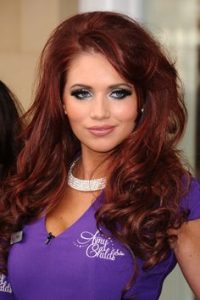 Amy Childs Facts:
*She was born on June 7, 1990 in Barking, United Kingdom.
*She was head girl at Raphael Independent School.
*She appeared in the reality shows The Only Way is Essex from 2010 to 2011.
*In 2011, Amy participated in Celebrity Big Brother in its eighth season.
*She received the “personality of the year award” in at the 2011 Reality TV Awards.
*Her idol in Katie Price.
*She opened her own beauty salon called “Amy Childs Salon” in Essex.
*She is a big fan of rapper Snoop Dogg.
*She has suffered from dyslexia since childhood.
*She once dated actor Jay Hector.
*Visit her official website: www.amychildsofficial.co.uk
*Follow her on Twitter and Instagram.