Amy Klobuchar is an American lawyer and politician serving as the senior United States Senator from Minnesota since 2007. She is a member of the Minnesota Democratic-Farmer-Labor Party. Previously, Klobuchar served as the Hennepin County Attorney from 1999 to 2007. In February 2019, she announced that she is running for President in the 2020 United States presidential election. Born Amy Jean Klobuchar on May 25, 1960 in Plymouth, Minnesota, she is the daughter of Jim Klobuchar (James John Klobuchar) and Rose Katherine (Heuberger). Her father is a journalist, author, columnist, and travel guide. Klobuchar is a graduate of Yale University and the University of Chicago Law School. She was a lawyer in Minneapolis until being elected county attorney for Hennepin County in 1998. She has been married to John Bessler, a private practice attorney since July, 10 1993. Together they have one daughter, Abigail Klobuchar Bessler. 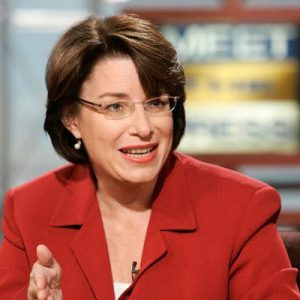 Amy Klobuchar Facts:
*She was born on May 25, 1960 in Plymouth, Minnesota, USA.
*She earned her B.A. degree in political science in 1982 from Yale University.
*She received her law degree from the University of Chicago Law School.
*She is a member of the Democratic Party.
*She was elected as a Democrat to the U.S. Senate in 2006.
*She is the first woman elected to represent the State of Minnesota in the U.S.
*She was a legal adviser of former Vice President Walter Mondale.
*She is a member of the United Church of Christ.
*Visit her official website: www.amyklobuchar.com
*Follow her on Twitter, YouTube, Facebook and Instagram.