Andre Ward is an American former professional boxer who competed from 2004 to 2017, and retired with an undefeated record. He was the WBA, WBC and The Ring Super Middleweight champion. He won the gold medal at the 2004 Summer Olympics in the light heavyweight class and turned professional on December 18, 2004. As an amateur boxer, he compiled a 115-5 record. In 2015, he made his acting debut, playing the boxer Danny “Stuntman” Wheeler in the sports drama movie, Creed. Born Andre Michael Ward on February 23, 1984 in San Francisco, California, USA to parents Madeline Arvie Taylor and Frank Ward, he has one brother named Jonathan. He is of Irish American descent on his father’s side, and of African American descent on his mother’s side. He attended the Hayward High School in the East Bay. On December 18, 2004, he made his debut as a pro in a bout against Chris Molina, and retired from boxing without having lost a single professional boxing match. In 2009, he married Tiffiney Ward. They have four children: three sons and one daughter. 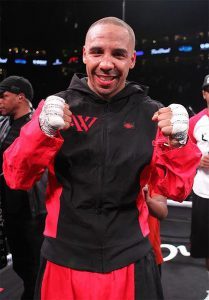 Andre Ward Facts:
*He was born on February 23, 1984 in San Francisco, California, USA.
*He belongs to both Irish American and African American descent.
*His father was also a boxer.
*He was introduced to boxing at the age of nine and turned professional on December 18, 2004.
*In 2011, he was named Ring Magazine Fighter of the Year.
*He was ranked as the world’s best active boxer during his reign as light heavyweight champion.
*Visit his official website: www.andresogward.com
*Follow him on Twitter, Facebook and Instagram.