Bella Hadid is an American model. She was signed to IMG Models in 2014. In June 2016, Hadid was ranked in the Top 50 Models ranking at Models.com, and won Model of the Year Women from the Industry’s vote. Born Isabella Khair Hadid on October 9, 1996 in Los Angeles, California, USA, to real estate developer Mohamed Hadid and former model Yolanda Hadid, her mother is Dutch, and her father is Palestinian. She has two younger siblings, an older sister named Gigi, and a younger brother, Anwar, both of whom are also models. She has two older, paternal half-sisters, Marielle and Alana. She was an equestrian as a teenager. She started competing in equestrian when she was three years old. In 2014, she moved to New York to pursue her modeling career. She was in a relationship with R&B singer The Weeknd from 2015 to 2016. 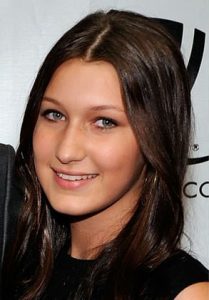 Bella Hadid Facts:
*She was born on October 9, 1996 in Los Angeles, California, USA.
*She is the younger sister of Gigi Hadid.
*She started modeling when she was 16 years old.
*She is a nationally ranked equestrian.
*She is good friends with Kendall Jenner, Kylie Jenner and Hailey Baldwin.
*Follow her on Twitter and Instagram.