American actress Andrea Barber who is known for portraying Kimmy Gibbler in the ABC TV series, Full House and its Netflix spin-off series Fuller House. She played Carrie Brady in the TV drama series, Days of Our Lives from 1982 to 1986. Barber was born on July 3, 1976 as Andrea Laura Barber in Los Angeles, California, USA. She has two older brothers named Darin and Justin. She married Jeremy Rytky in 2002, and the couple had two child before getting divorced in 2014. 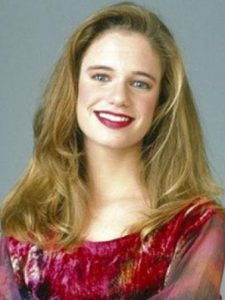 Andrea Barber Education:
She attended La Serna High School in Whittier.
She earned a degree in English from Whittier College.
She earned her MA degree in Women’s Studies from the University of York.

Andrea Barber Facts:
*She began acting at the age of four.
*She worked as an assistant to the director of Office of International Programs at the Whittier College.
*Her name means “Manly Laurel”.
*Follow her on Twitter, Facebook and Instagram.