Andrea McLean is a Scottish journalist, author and television presenter, best known for her television work with ITV. She worked as a weather presenter for GMTV between 1997 and 2008, and is a co-presenter on ITV’s daytime chat show Loose Women. She competed in ITV’s ice-skating competition Dancing on Ice and hosted Dancing on Ice Extra after she was eliminated from competition. Born on October 5, 1969 in Glasgow, Scotland, to parents Betty and Jack McLean, she was raised in Trinidad and Tobago with her sister. She is of Russian Jewish descent on her father’s side. She attended and graduated from Coventry University with BA honors in Modern Studies, and later earned a Postgraduate Certificate in Periodical Journalism. She first came to fame as a weather presenter. She married businessman Nick Feeney in November 2017. She was previously married to Steve Toms from 2009 to 2011, and Nick Green from 2000 to 2005. She is the parent of two children: Amy Jane Toms and Finlay John Green. 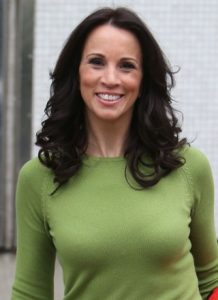 Andrea McLean Facts:
*She was born in Glasgow, Scotland on October 5, 1969.
*She started her career as a freelance travel writer in 1993.
*Famous for being the co-anchor on Loose Women, a daytime talk show by ITV.
*She used to work in a factory labeling clothes.
*She has her own jewelry range on QVC known as Diamonique by Andrea McLean.
*Visit her official website: www.officialandreamclean.com
*Follow her on Twitter, Facebook and Instagram.